Powering the small and gigantic sea-faring vessels on their adventurous voyages, 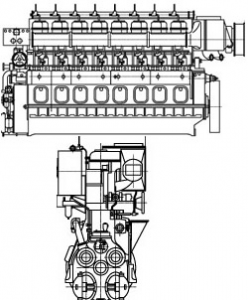 marine diesel engines have been around for quite some time. In fact, if history is to be revisited, you would learn that the first ever marine diesel engine was installed back in 1912, in a Danish ship known by the name of MS Selandia.

Over the years, marine diesel engines have undergone significant developments and improvements. However, the basic mechanism of operation remains the same.

Fuel is ignited inside a chamber, and the released thermal energy is utilized to perform work on the propeller system which drives the ship forward.

The developments as such have mainly been in the area of how many steps it takes for a diesel engine to complete a full cycle while converting heat energy into work. The efforts invested in this particular domain have given rise to two different types of marine diesel engines.

These are the preferred engines for powering a ship’s propulsion system. This is because a two-stroke marine diesel engine offers superior power output and improved fuel economy compared to its counterpart.

The operation cycle of two-stroke marine diesel engines comprises one complete revolution of crankshaft and a single up and down movement of the cylinder piston.

Air is first injected into the cylinder, with the engine simultaneously expelling the used-up gases. As the gases are expelled, the cylinder piston moves upward due to the momentum of crankshaft. At that time, atomized fuel is added. In presence of highly compressed air, the atomized fuel explodes, pushing the piston downwards. The downward movement of piston characterizes as work done by the engine.

Four-stroke marine diesel engines, although much more compact in size than two-stroke engines, and offering higher RPM, are not as extensively used as main engines in merchant ships.

Why is the latter preferred? We have already discussed that in the previous section.

A four-stroke engine cycle is comprised of two revolutions of the crankshaft and the cylinder piston has to move up and down twice to convert thermal energy into work.

It all starts with air intake process. Air enters the chamber through inlet valve. At this time, the exhaust valve is closed. As the air moves in, the piston moves downward. This rotates the crankshaft by 180°. The momentum of crankshaft then pushes the piston upwards. At this stage, both the inlet and exhaust valve are closed.

The piston compresses the air, fuel gets injected and the mixture is ignited. Crankshaft rotates by further 180°, completing one revolution. The piston then moves down because of the heat energy released during ignition and again back up, expelling the used gases through the exhaust valve. The crankshaft completes yet another revolution in the process.

Knowing the difference between the two types of diesel engines and how they operate is important and we hope the discussion we just had proved to be an enlightening one in the context.

A BONUS read: A Beginners’ Guide to Marine Engine Bearings.